I think I mentioned back in my Woomi Garden review that Korean restaurants tend to be a hybrid of Korean and Japanese or Korean and Chinese food.  Da Rae Won leans more on the Korean-Chinese side of things.  They are located in the same shopping center as Gah Rham, and they are also much smaller in size.

I don’t think the two restaurants necessarily pose a threat to one another though, because they both offer very different things.  Also, if I’m remembering correctly, Da Rae Won is a lot cheaper, but the selection on their menu is far more limited.

The main (and I think the only) real reason I ever wanted to go to Da Rae Won was for their black noodles.  For those of you who don’t know what that is, I’ve pictured it below.  People familiar with it might know it as “ja jang myun”  (짜장면). 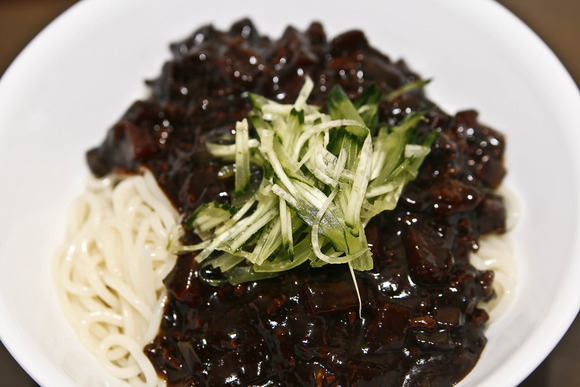 I actually don’t like this dish as much as I did when I was younger, but every once in a while I do still crave it.  (I think I just ate it too much when I was little and allowed myself to get sick of it.  There’s nothing wrong with the dish itself.)  It’s a nostalgic taste for me for sure.  I used to get it all the time at this restaurant called Kum San Oak in Rockville, but I stopped going there when they changed owners; I felt like the quality dropped.  I heard several years back they were going through some problems anyway because of competing restaurants, so I wouldn’t be surprised if it’s not there anymore.

Anyway, address for this restaurant is as follows:

Now for the ratings bit.

Online Ordering?:  No.
Delivery?:  No, but I think carryout is an option.
Wi-fi?:  No.
Kids Menu?:  No.
Buffet?:  No.
Kosher-friendly?: No.
Vegetarian/Vegan-friendly?: I think that they do have some vegetarian-friendly items on there.
Recommended?: Yes—but only if you’re in the area and you’re craving some ja jang myun.

Compared to the other Korean restaurants I reviewed, I will admit that this isn’t my first choice of places to go.  However, if you’re craving the noodles or Korean food in general and want to stay on the cheaper side of things, I would say it wouldn’t hurt to try this location.  The service might seem a little lacking too, but quite honestly their menu items don’t require as much customer service maintenance as the Korean restaurants that specialize in BBQ do.  If you’re nowhere remotely close by the College Park area though, I would say that there’s no huge need to go out of your way to try the place.