I’m one of those women who can’t stand seeing the white tips of their nails, or just having long nails in general.  I don’t have anything against women who like to grow their nails long or who have very pretty nails by any means—I just don’t like the look and feel of it myself.  That being said, you can probably imagine that I trim my nails quite frequently—they keep growing back faster than you can say Rapunzel.

Some time ago, I asked my boss if we happened to have any nail clippers lying around.  My boss is actually pretty awesome, so I knew he wouldn’t think I was asking a strange question.  He did a little hunting and came up with nothing, so he gave me a little money to go buy some and asked me if I would mind picking up some office supplies as well.  I told him no problem—I’m a big fan of killing two birds with one stone.

I went to the CVS nearby our office and went straight to the nails section first.  There were three options for nail clippers.  Two of the choices were from Revlon and one of the nail clippers was made by a company called Trim.  The most expensive Revlon nail clipper came in a mini-nail care kit.  I’m not super girly and I really don’t use anything other than clippers for my nails, so I mentally crossed that one off right away. 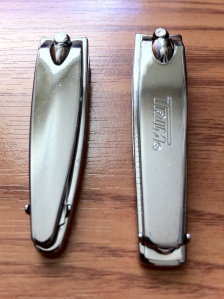 So now it was down to Revlon (left in the above picture) and Trim (right).  Revlon was a brand I recognized; I always use it at home, and I have Revlon nail clippers in three sizes—travel, a medium-sized one (for nails on the hand), and a larger-sized one (for the nails on the foot).  The two nail clippers I have pictured above, despite how they look from the way I shot the picture, are the travel-sized ones of each brand.

I didn’t want to waste too much time over something so simple, so I had to make a quick decision.  Do I go with the familiar Revlon brand?  Or do I pick the Trim brand, which pretty much seems the same from what I could tell, but it was a lot cheaper at $1-something (vs. the Revlon clipper, which was $5-something).  Not wanting to get the more expensive nail clipper since it didn’t seem all that necessary, I went with Trim.

Turns out, that was the wrong decision.

Aside from the Trim nail clipper being a little longer and the little “mouth” where it clips your nails seeming only the slightest fraction bit wider than the Revlon clipper (and really, you have to squint to even see that difference), the nail clippers totally look exactly the same.

Upon even closer inspection, maybe the Revlon brand seems to have been made “smoother,” but then again, my eyes could just be seeing what they want to see and my brain could totally be making that up right now.

So what exactly is my problem with the Trim clipper?

This thing makes your nails fly.  Seriously, I’m not trying to be funny or anything here.  I clipped the nails of one hand yesterday at work and I ran into the same problem I had the only other time I used the same clipper to trim my nails at work (which was the day I bought it).  It didn’t seem to matter if I clipped my nails slowly or if I clipped them quickly.  In fact, it didn’t even seem to matter if I put my hand a little deeper into the office wastebasket.  It’s almost as if the clipper has the magic powers to overcome any obstacle you throw at it and gives your clipped nail incredible trajectory.

The worst part?  You can’t even aim where the clipped off nail is going to go.  I had a piece of nail bounce off my lip, another one fly off into the unknown (I seriously couldn’t find where it went so that I could clean it up), and the worst was when one of them unexpectedly bounced off my eyeball.

Needless to say, now I understand why this brand was only $1.29 (or something like that; maybe it was $1.59, I really don’t remember).

For anyone who might be curious yes, I tossed the clipper after I took the two photographs of it that I included in this blog entry today and now I have one of my extra Revlon travel-sized clips in my work bag as its replacement.  I even tested the Revlon clipper out again just to make sure I wasn’t being crazy or anything.  After a successful test, I’ve decided that no, I’m not crazy and my nails weren’t flying everywhere because I haven’t been drinking enough milk or something and causing them to become brittle.  (Yes, that was another theory I had come up with because I thought surely it couldn’t be the nail clipper.)

Conclusion: Trim nail clippers—or at least the travel-sized one anyways, since that’s the only one I tried—are junk, and I am never buying another one of this brand again.

Well, until my next entry, see you all later!

2 responses to “Apparently, all nail clippers are not made equal…”