WARNING: This post contains mild spoilers for the movie, The Five-Year Engagement.

What started off as a funny movie (though it was mostly a rehash of what you see in the movie’s trailer) has a story that sort of unravels about halfway through.  I had been expecting the movie to be nothing but laughs the entire way through, so I was a little surprised when the story took a bit of a serious turn.  Thinking back on it again though, I realize that I may have just mistakenly assumed the movie was going to be purely comedy. 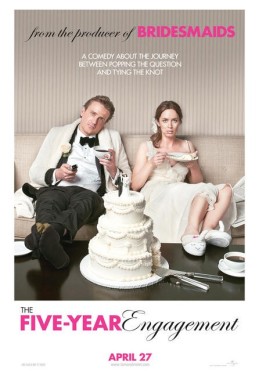 This is sort of a backwards love story.  I think the movie definitely addresses how much the societal views of marriage has changed, and I think it definitely also shows the more realistic side of relationships—that things don’t always run as smoothly as the happily ever after endings of Disney movies.

I think the movie was somewhat realistic.  It shows a couple who appear to have a really healthy relationship going in the beginning, and it seems like nothing is going to keep them from falling apart.  However, this does not remain the case for long.  As Jason Segel and Emily Blunt’s characters push the date of their wedding further and further back, it begins to take a considerable toll on them, and their relationship becomes dysfunctional.  How dysfunctional?  Well, both characters begin to fall for the illusion that the grass is greener on the other side, and their relationship eventually crumbles down to the point where they actually start seeing other people.

Now that I think back on the movie though, it kind of doesn’t make sense why the couple wanted to wait so long to get married in the first place.  Perhaps they wanted to wait until every aspect of their lives prior to marriage was perfect before actually tying the knot—Blunt’s character, Violet Barnes, wanted to make sure she had established herself as a career woman and Segel’s character, Tom Solomon, didn’t want to be raising a family in Michigan.  What this couple couldn’t seem to accept is that sometimes life just doesn’t go according to plan.  So in the end, every reason these two seemed to come up with as to why they shouldn’t just get married sooner rather than later came off seeming more like a long list of excuses rather than valid reasons as to why the marriage needed to be delayed.

By the end of the movie, I think I was a little confused as to what the overall message was.  Maybe it was if you think you’ve found someone as close to perfect for you as you can get, then just get married?  I’m not sure.  For those of you who have also seen this movie, feel free to voice your thoughts on this entry; I’m always open to hearing other opinions.

If you enjoy watching movies where it feels like you’re watching a real-life situation unfold before you (with a dash of unrealistic elements here and there), as opposed to watching something that’s not very “slice-of-life,” then you might enjoy this movie.  For me personally, I think I just have to be in the right mood to see slice-of-life pieces, which may be why I didn’t enjoy this movie as much as I probably would have on a different day.

Anyway, here’s my usual ratings breakdown for this movie:

There were points where I felt like the movie dragged, but it wasn’t an entirely bad watch.  It was more of a DVD rental-type movie for me though.  I went during an early morning showing of this movie, and the crowd seemed to be mostly older people, like roughly in their 40’s and over.  Normally I wouldn’t even think anything of it, but it’s actually kind of unusual to see much of a crowd in the theater I was at around that time slot—usually there’s only 2-4 other people in the theater other than myself, and they also usually seem to be around my age or early 30’s.  That being said, I think that if you’re someone in that 40+ age-range, there’s definitely a chance you might end up enjoying the movie a lot more than I did.

So I’m a little excited for the month of May because Avengers is coming out this week, and three weeks after that, MIB3 comes out, so you can be sure I’ll be writing up entries for those movies.  After that, it’s going to be a bit of a long wait until The Dark Knight Rises and Premium Rush.  Who knows, maybe I’ll find something interesting to write about before then.  Either way, see you all again next entry!