Maroon 5 is one of my favorite artists and they consistently make catchy songs that I like to listen to on repeat in the car.  I just bought their new album, Overexposed, the deluxe edition a few days ago and I’ve already picked out which songs I like best from the album. 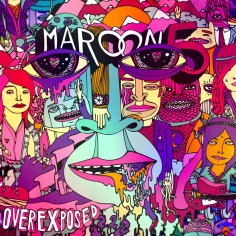 When I look back at their first album to now, I feel like it shows a steady evolution in their style from pop to something more like you can dance to.  The song “Love Somebody” in particular sounds like something you’d see on Glee or a musical number used by a flash mob.  Anyway, below the cut I’ve bolded my favorite songs, along with some comments of what I thought of several of the songs on the album.

This is the track list from the deluxe vversion of the album from iTunes.

I don’t think this was their strongest album, but I’ve been enjoying listening to it.  Fans of their earlier stuff may be a little disappointed since I think this album sounds pretty different from their older songs.  However, if you really liked “Moves Like Jagger” and “Payphone,” you’ll probably enjoy this album.

For anyone that might care, here’s my favorite songs from their previous albums:

I also bought Linkin Park’s new album LIVING THINGS on the same day I bought Overexposed, and I will be reviewing that next, so stay tuned!!