I know, it’s been an eternity and a half since my last entry on this blog.  Part of the reason is because I have been so unbelievably busy.  The other half of it is that I’ve been feeling a little lazy about posting.  Hopefully this will mark the restart of my already irregular postings to this blog.

When I first saw the trailer for this movie, I immediately thought, parody of Tom Hardy and Joel Edgerton’s Warrior (2011).  Now, whether or not that’s actually the case, I do think that they borrowed at least the MMA idea from that movie. 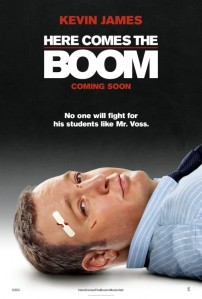 Kevin James is great here in Here Comes The Boom.  He’s as funny and endearing as ever—I definitely laughed hard for a majority of the movie.  Then again, I can be pretty easy to please when it comes to comedy.

If you’re the lame humor type like I am, then you’re definitely going to enjoy this movie.  If corny movies aren’t your thing, then I would steer clear.

Some of my fellow movie lovers that I’ve talked to have told me they’re not a huge fan of Salma Hayek, but I actually don’t think she was too bad here.  Bas Rutten was also pretty hilarious as part of the supporting cast, and Henry Winkler was pretty funny too.  I think the scenes where I laughed the hardest are when James, Rutten, and Winkler are together.