Saw this movie just this past weekend with a friend.  This was one of those movies that I was kind of on the fence about seeing, given that while I do vaguely remember the other two films with Daniel Craig as James Bond being filled with decent action scenes, I honestly can’t remember too much else about them. 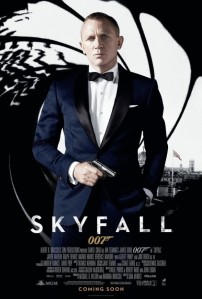 This movie had some pretty good action scenes, and the storyline was better than what I had been expecting; however, on a personal level I’m not sure if this is one of those movies that will really stick out in my mind as one of my favorites in a few months.

The opening credits kind of reminded me of the opening to The Girl with the Dragon Tattoo (2011), and it was pretty cool to watch; I enjoyed hearing Adele’s vocals as well.  My friend told me that they did something similar at the beginning of Quantum of Solace (2008), but as I’ve stated before, I don’t really remember a lot about that one.  I do recall, however, enjoying Quantum of Solace a tad more than I did Casino Royale (2006).

I was a little reminded of The Dark Knight Rises (2012) while watching the beginning, mostly because I saw a parallel with Christian Bale’s Bruce Wayne and Craig’s James Bond—how both characters had to rehabilitate themselves to get ready to go back into the field.

There’s a bit of a long-winded chase that goes on for the first half of the movie that helps to eventually lead 007 to the “main villain” for this movie.  I think the movie started to really pick up when it reached the second half, and I will admit that I enjoyed that part thoroughly.  Some of my favorite scenes involved Ben Whishaw as the somewhat nerdy Q.  His character got to play with some pretty cool-looking fictional tech.

Overall the movie was enjoyable, though there are some parts my friend and I thought weren’t entirely necessary.  Like how random Bérénice Marlohe’s character seemed in the whole grand scheme of things, though I’m sure for the men in the audience she makes for some pretty good eye candy.  Anyway, if you’re a fan of 007, and if you are an action-movie junkie, I’m sure you won’t be disappointed here.