I went to see this mostly because of all the buzz I have been hearing about it, and partially because I had a free ticket voucher with Regal that was expiring on the 5th of December.  With all these no pass restrictions, I knew I needed to use it up soon, and why not on a movie that I wasn’t too sure about? 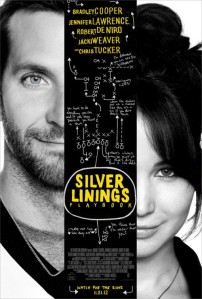 Now that I’ve seen it, I will say that I don’t think it quite lived up to all the hype for me.  I can see where the appeal is for diehard Eagles fans (as well as the whole connection between finding your “silver lining” and sports playbooks), and I also thought Jennifer Lawrence did well here.  On the whole though, I didn’t really see anything special that really made me feel like this movie was going to stand out in my mind in ten or twenty years.

The plot being a romance revolving around two individuals struggling with mental illness might make for a cute and quirky story, but it just didn’t work for me.  Of course, it could be that I’m just a little biased.  It’s not something I talk about often, but one of my parents actually struggles with what Bradley Cooper’s character has.  I’ve watched them have their romance with someone who is also struggling with a mental illness, and believe me, it was nothing at all like the movie portrayed.  Sure it’s a cute idea, the whole notion that two wrongs make a right, so to speak, but to me this movie was a lot of wishful thinking.

I also can’t say that the story wasn’t predictable.  I think based on the trailers and even from just looking at the movie posters, it’s already easy to guess who the audience is supposed to be rooting for.  The lack of screen time and character development of certain characters also makes it seem even easier to make that choice.

And it’s odd, but for some reason parts of the movie reminded me of George Clooney’s The Descendants (2011).  Maybe it was all the running, which kind of reminded me of the scene in The Descendants where Clooney is running down a street after finding out about his wife’s infidelity while she’s in a vegetative state.  I guess the whole theme of dysfunction too.

The beginning is more solid than the end, or at least I thought so.  Then again, I always tend to like comedies better when the scales are tipped more towards funny than serious.

I think for me this movie was one of those bandwagon movies where it seems like everyone loves it just because they’re told to love it, and if you don’t, then you’re totally missing something profound.  Admittedly, those kinds of movies (or even books) make me a little uncomfortable only when there seems to be some secret blacklist that people can get on if they’re not with the majority, not so much because of the negative feedback towards their differing opinions, but more because then this environment seems to get created where differences in opinion are just “not allowed.”  Anyway, I digress.  If my lack of overwhelming praise for this movie makes me part of the minority, then so be it.