Thought I’d do something  a little different tonight and write about a Korean drama series that came out recently on SBS (which is a Korean television network).  For those who aren’t familiar with the genre, here’s a quick quirk/fact about it.  During the 90’s, there was something called the “Hallyu Wave,” which is considered a time when the Korean entertainment industry was in its “golden age,” so to speak.  While that sounds almost mythical, I do agree with that statement.  Ever since the mid-2000’s, I felt that the quality of Korean music and film just isn’t what it once was.

So when I run into a drama like this one, I relish it for all its worth.  I learned about this series (Phantom/Ghost) from a preview tacked onto the end of some other series, though I can’t remember which one it was off the top of my head.  I think it might have been Rooftop Prince (2012), which I think is another fantastic recently produced Korean drama.  That one is a lot more lighthearted, but both series play out like a huge jigsaw puzzle, which I think makes it all the more entertaining. 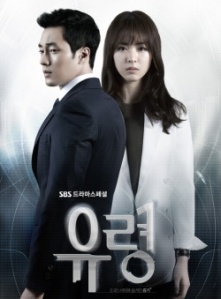 Unlike American shows, for the most part, Korean dramas don’t have multiple “seasons.”  It’s just one shot of X number of episodes and that’s it.  This way of doing things has its pros and cons, but it’s a discussion that I think I’ll save for another day.  Anyway, if you’re interested in trying something foreign, I think this might be a good starting point, especially since there’s not really a romance element in this one, which is normally a signature in Korean dramas.  I’ve posted a quick teaser for the series below, as well as just a few more thoughts I have about it.

A quick synopsis of the plot can be found here.  As plain as it might sound though, I assure you, the story sucks you in right away from episode one, and there’s so much more to the story than the description lets in on.  If you do a little Google hunting, you’re sure to find a place where you can watch the drama with English subtitles.  Overall I was really impressed with this drama last year, and aside from Rooftop Prince, it’s the only other drama that really stood out in my mind from last year.

I also think that this is a good starting drama for newbies, because it doesn’t have that “staple” cliché romance aspect.  Which is great because that element can be annoying for some, and also sometimes I think it limits the audience that might be interested in watching it, since I don’t think most men are clamoring for that sappy romance fix.

As I mentioned in my Chicago Fire (NBC, 2012-2013) entry, I don’t really have a ratings scale for television shows, but if I did, this one would also be on the positive upper end of that scale.  If you happen to find it streaming anywhere, I hope you will give it a chance, and I further hope that you enjoy it as much as I did.