WARNING: This review contains mild to significant spoilers for the movie Safe Haven.

Before I get started with this entry, I just want to say that yesterday I discovered that the follower count for this blog jumped from 53 people to 246 followers!  Overnight!  I don’t know if any of you are reading this right now, but if you are, I want to say THANK YOU to the 53 loyal followers I had before, and WELCOME to the 193 new people who have jumped on board for this blog.  I appreciate your interest and support, and I hope you all continue to enjoy the entries that I post to this blog.  You all are amazing, and my week has totally been made.

Also, a quick plug to all my new followers—every now and then I’ll post up an interview with someone working in the arts/entertainment industry.  My most recent interview was with actor Blaine Gray.  If you haven’t checked out that entry, both he and I would appreciate it if you would give it a read!  I’ve linked the entry to his name, so all you need to do is click on it!  Thank you!

Now onto the review.

I have yet to see another Nicholas Sparks novel-turned-movie adaptation that I like as much as I did The Notebook (2004).  I honestly don’t know what led me to see this movie other than the fact that I was in kind of a romantic movie mood when I watched it. 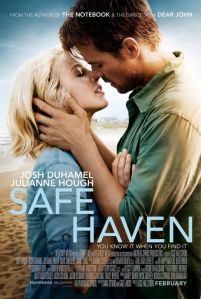 I’m sad to say that it seems like they don’t make romantic movies like they used to.

It’s a romance movie, so for the most part the fact that a lot of the story is going to be predictable and cookie-cutter seems like a given.  However, this movie was also incredibly slow-paced, and while I don’t necessarily mind long movies, I do if a story that could be told in thirty minutes gets stretched out to two hours.  Especially if within that two-hour span, there isn’t a good progression in story, nor is there decent character development.

To break it down, I’ve decided to list all the things I found to be glaringly wrong with this movie.  This is where the spoilers really start, so if you’re not interested in those and you’re only curious as to what I’m rating this film (which I can tell you right now is not going to be a very high rating), then you will want to just scroll all the way to the bottom of the entry.

Ladies and gentlemen, I am the queen of loving cheesy moments and corny movies.  I’m the type who can’t take a lot of blood, guts, gore, and violence in a lot of movies, so my movie watching experience is more on the limited side.  With that in mind, I try my best to give every movie I see a fair shot, and I rarely give films this rating, but even this was way too much for me.  I was absolutely unimpressed.  If I didn’t need a last-minute film to watch for my contribution to Incognito Magazine, I would have walked out on this altogether.

Thankfully April is just another month away, as it seems there are some promising movies coming up just over the horizon, like Oblivion, Iron Man 3, and Star Trek Into Darkness, just to name a few.  Definitely looking forward to those.

Well, until next time!