This is one twisted story, and when I say that I mean the characters are all so unbelievably flawed that by the ending there really isn’t anyone worth rooting for.  For the most part I think the characters were portrayed realistically, albeit the occasional stretch that can be easily ignored.  As far as hyped books go, this one deserves a good bit of the attention its been receiving. 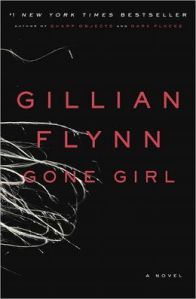 There’s a lot of finger pointing and did they or didn’t they scattered all throughout the novel.  Some parts had a little too much description going on for my liking and made me space out some, but overall this book captured my attention enough where I was able to read it from start to finish in one sitting.  I was pretty exhausted afterwards, feeling as if I just went through a movie marathon or watched the entire series of something.  The way the story is set up, I can see this being turned into a TV show or a movie, though I doubt the first will happen unless they change the story and just keep its skeletal structure for the episodes.  The cat’s already out of the bag, in word form, so there probably isn’t much sense adapting it for television.  Then again, who knows—I’ve been wrong before.

I read somewhere that Stephen King has praised has praised at least one of her novels, and based on this one, I can see why.  She writes in a way that can definitely appeal to his camp of readers.  The women don’t really talk like ladies and personally I felt the overall tone of the book was very masculine; had I not done a little research beforehand, I think I probably would have felt really surprised upon discovering the author is a woman.  This is not really for the super conservative reader, so if you’re the type that squirms easily with blunt narrative, this might not be the book for you.

Not sure how intentional it is, but the story seemed to almost have a cautionary tale aspect to it.  Basically, men, treat your women right.  If not, there’s a chance you may unleash something you’re not quite prepared for.  After finishing the book, my initial reaction was wow.  I’d say more, but that might give too much away, so I’ll leave it at that.  What I will say though, is that everything that happens in this book sounds farfetched at times and a little too crazy, but then if you take a moment and think about all the crazy things people have done (like serial killers and the like), then the stuff that goes down in this novel actually can seem like it could be a remote possibility.

I think what I liked most about this book was how it addresses some of the issues a lot of couples face today; there’s a lot of focus on relationships, true love, and what mainstream media teaches us love is supposed to be.  And if you’re a fan of dysfunction, this novel’s got plenty of it.

The main reason why I feel I can’t give this book more than a high B is the fact that I found a good chunk of the book to be unnecessarily redundant.  There’s also a matter of the ending, which I thought was a rather lackluster conclusion to an otherwise great read.

After reading this and you feel like you could use a little more of all the chaotic and crazy, be sure to check out the writing of my fellow writer, Troy Blackford.  His personal website features a ton of his short stories, which he posts up fairly regularly.  You can visit him at http://www.troyblackford.com/ —and if you like what you see, you might even perhaps consider buying one (or all) of his books.  You can do that by clicking HERE.