Initially, I had no desire or interest to see this movie.  The earliest trailer I saw didn’t really pull me in.  What did get me on board was a trailer I saw about a month or so later, which I have included in this entry. 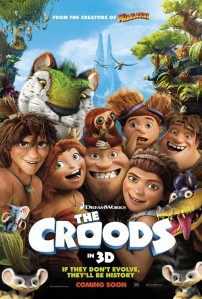 I think what honestly made me change my mind was the sloth.  Kind of like how I was drawn to Despicable Me (2010) only because of the minions.

Here’s the trailer I was talking about:

In hindsight, this does reveal a lot of what happens in the film…and at the same time, it doesn’t.  I was very surprised by how much I enjoyed this film, though I do admit I went in with extremely low expectations.  Also, based on the reactions of the kids in the same theater I was in, I think it’s safe to say it definitely speaks to the little ones.  At least where I was, I didn’t seem to be alone in liking the sloth character, hahaha.

Personally, I think the movie did really well in terms of character development.  Even the “minor” characters seemed to round out well by the end.  There was also the right amount of serious plot and funny to go along with it.  Sure there were times where I kind of wondered where it was going, but after a while the lack of direction didn’t seem to bother me as much.  I was successfully distracted by all the hilarity.  I warn you though, it’s very lame humor.  If that’s not your thing, you’re probably not going to enjoy it as much as I did.

There was a section of the movie that really surprised me (in a good way).  Kind of like when I teared up unexpectedly at the beginning of Disney-Pixar’s Up (2009).  Aside from that though, the rest of it is pretty much predictable, but that’s not necessarily a bad thing.

Normally I know who voices the characters before I walk into an animated film, but I walked into this one completely blind.  I will say that when I did my research so I could apply the appropriate tags for the entry, I was somewhat surprised, but at the same time when thinking back on the character designs and how the voice acting was done I realize I probably shouldn’t be.  The voice acting cast was chosen very well.  And now that I know who voiced which character in this movie, I can appreciate the film in a whole different light, in retrospect.

Not perfect, but it definitely surpassed my expectations.  It also has a lot of nice little lessons for both parents and their children.  This is one movie where I’m glad I didn’t spend a free ticket voucher—I’d rather use those on movies that I’m curious about even though I’m about 99.9% sure they’re going to be super awful.