I had the choice between watching an advance screening between Last Vegas and About Time, since they were both showing last night.  Since Last Vegas is opening this weekend, I ended up deciding to go see About Time.  I was pretty glad I did. 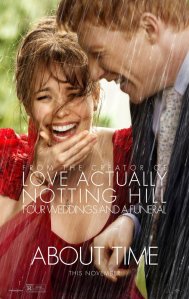 Rachel McAdams is no stranger to acting characters dating time travelers.  Just a few years ago, in 2009, she played Eric Bana’s wife in The Time Traveler’s Wife.  Between the two, I preferred About Time.

The story had just the right amount of funny and emotional feels for me.  Now is it predictable?  Yes.  Is it full of clichés as well?  Absolutely.  I will also add that there are plenty of inconsistencies in the whole matter of time travel, but I think that’s to be expected as that’s what always seems to happen when the subject gets covered.

All that aside, I think the casting was done well and the characters were written memorably.  I will also say that I really liked Bill Nighy in this film.  I found his character to be quite humorous and very likable.

I would also like to commend the supporting cast.  Now that I think back on it, most of them brought comic-relief to the story.  I am guilty of laughing pretty hard at some points (though mind you, I admit to being easily amused and making things funnier in my head), and I’m pretty sure I drove the stranger sitting next to me crazy, but I couldn’t help it.  I’m not sure if this clearly describes it, but the cast seemed like they were having such a good time, it made me wish I was on set too to join in on the fun.  I think that’s the best part for me, when a movie is able to make me feel that way.

Personally, I’d like to give this an A-, but I’m afraid people might start a riot.  Haha.  I think this is the perfect date night flick.  If you were into The Notebook (2004), then I’d definitely go.  I wouldn’t say it’s better than that movie (because come on, Ryan Gosling…!), but I will say I enjoyed it almost as much.  I think I’ll be getting this one on DVD.