I don’t recall being disappointed by a Marvel movie before, but I definitely felt let down by Avengers: Age of Ultron for a number of reasons.  I know each movie builds upon previous installments and sets audiences up for the next one, but this one felt too much like a stepping stone.  In fact, it felt like a really long, extended trailer for itself. 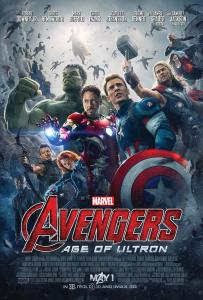 There were definitely moments where I caught myself wondering when the actual movie would start.  I think I held out hope for about an hour and a half, and then I realized what we were seeing was pretty much all we were going to get.

The action doesn’t necessarily disappoint, but I felt like the plot definitely did.  Maybe it’s a problem of having too many big named actors crunched into one movie, but one could argue that they’ve done it before and everything went just fine.  So what was the problem here?

I think the main problem had to be the villain.  Not to say that I didn’t like the use of Ultron, because I did, but really I felt like the movie did a whole lot of going nowhere.  Sure, one could say the point was character development and resolving the issue of in-fighting, but I feel like that sort of thing could have just as easily been done around a more substantial plot than what we were given here.

The major spoilers happen beyond this point, so if you haven’t seen the movie and don’t wish to be spoiled, then you can scroll all the way to the bottom of the entry if you’re just interested in reading my conclusory thoughts on this movie.

I wish the central focus had been more on the twins, Wanda and Pietro, because I felt like that’s what the secret ending after Captain America: The Winter Soldier (2014) was prepping us for.  Instead, they ended up being minor characters, and Pietro is killed off at the end.  Which makes for great dramatic value, but then it makes me wonder a few things, especially since Hawkeye carries Quicksilver’s corpse onto an escape pod.  Are they planning on Quicksilver pulling a Coulson?  Will he somehow show up on Agents of S.H.I.E.L.D. (2013)?  Or will he remain deceased?

As for the question of which Quicksilver interpretation was better, the one in this movie or the one in X-Men: Days of Future Past (2014), I honestly think it’s hard to say.  I don’t think the actors in this case could really be compared, because they were really playing two very different versions of the same character.  I was actually prepared to dislike Aaron Taylor-Johnson’s portrayal, only because I was so partial to Evan Peters’ version, but I was pleasantly surprised in feeling that I couldn’t, after watching this movie.  I was also gravely disappointed that they chose to kill his character off, just when I was warming up to him, but then again I suppose that maybe that is the best time to eliminate a character.  I have to say that I was impressed with Elizabeth Olsen’s acting.  I actually think she is a lot stronger of an actress than her twin sisters, and I look forward to seeing more of her in the future.

I did enjoy Jeremy Renner playing a little bit more substantial a role as Hawkeye here, and as random as the romance between Bruce Banner and the Black Widow seemed, given that no hints to this (as far as I can recall, anyway) were given in any of the previous movies, I found that I was able to forgive it because the chemistry did seem to be there.  Although I did feel like their romance shared some similarities with Captain America and Peggy Carter from the first Captain America movie; right down to the Hulk taking downing a plane somewhere.

My favorite scene had to be the short moment where Captain America hallucinates that he’s back in the World War II era, but I suppose that’s mostly because I have a soft spot for period pieces in general; that time period being one of my favorite backdrops for movies to be placed in.

Final Thoughts: While I wouldn’t take back my theater experience, I didn’t feel like I enjoyed this one as much as the other Marvel movies I’ve seen.  It’s not so awful that I would recommend staying away from the big screen, but I would say to prepare not to keep your expectations too high, so that you won’t get disappointed.  Normally I am also antsy to purchase a Marvel movie after it’s been released, but I actually don’t think I’m going to mind waiting a while for a price-drop on this one.